A semi-cooperative SF horror game where you and other crew members desperately fight to survive - and fulfill conflicting objectives.

Welcome to the world of Nemesis! This new board game, designed by Adam Kwapiński, is the result of a collaboration between Awaken Realms (creators of This War of Mine: TBG, The Edge: Dawnfall and Lords of Hellas) and Rebel (creators of Drako, Dream Home and K2) .

It's a 1-5 players semi-cooperative Sci-Fi horror where you and your friends try to survive while attempting to fulfill your secret objectives that may sometimes collide. It will also enable full co-op as well as solo play experienceNemesis offers one-of-a-kind gameplay, that you currently won't find anywhere else in the board game world. It has been in professional development for over three years, so it already plays very well, provides good balance and contains a multitude of interesting mechanics, as proven by the prototype reviews below. If you like Sci-Fi survival settings and ships swarming with alien life forms, you will love it - and if that genre was never on your radar, this game is likely to change your mind! 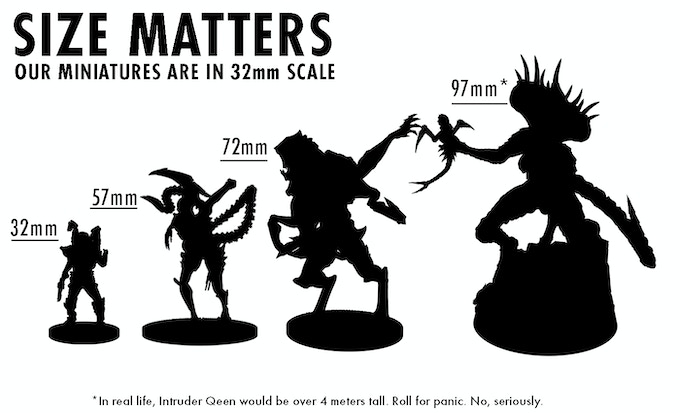 By backing this project on Kickstarter you will get all unlocked Stretch Goals for free to every Core Box! 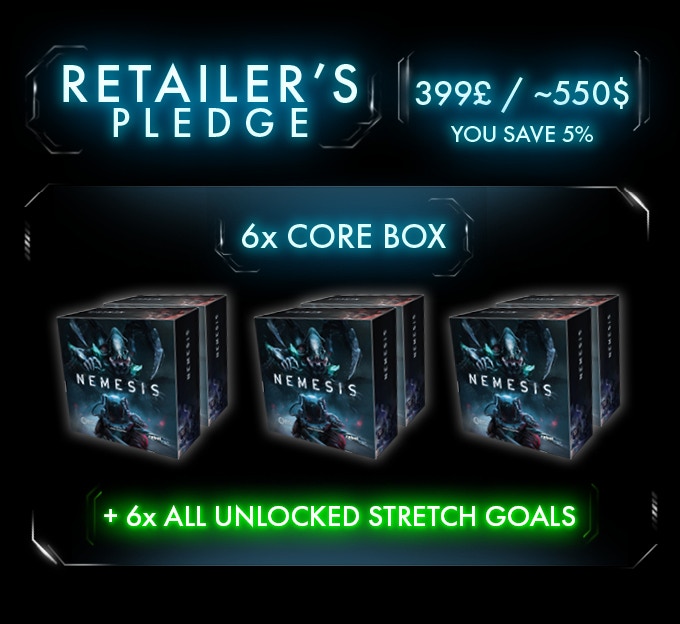 *Out of all reviews / movies two were paid: Cardboard Rhino (rules presentation / tutorial how to play that took a lot of time to make!) and Man vs Meeple (which is a preview showing the game in detail). All other videos were not paid. 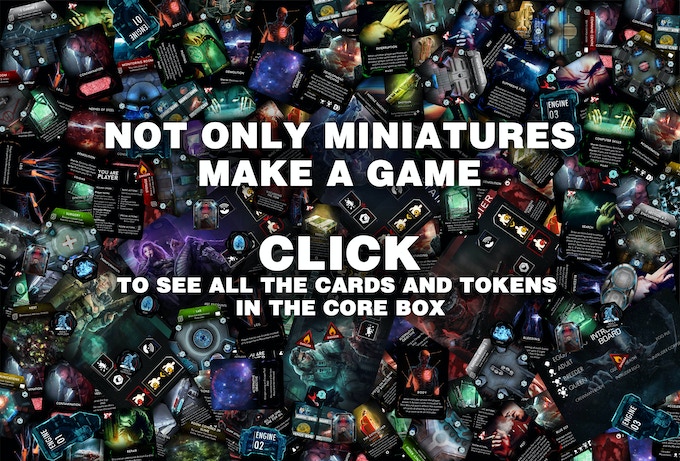 Asymmetric crew members During the game, you will control one of the crew members with a unique set of skills, personal deck of cards, and individual starting equipment. These heroes cover all your basic SF horror needs. For example, the scientist is great with computers and research, but will have a hard time in combat. Soldier on the other hand...

Your characters complement each other and will need to collaborate in order to survive. There's one catch: you are never sure who can you trust! Cinematic experience 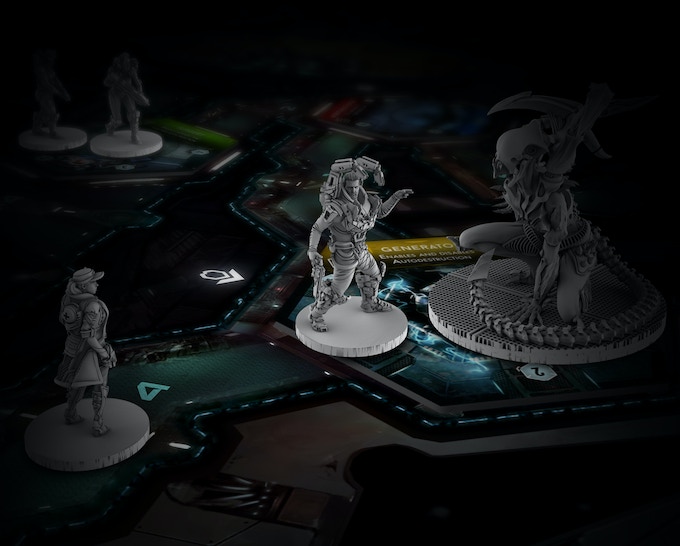 You drift back from the cold void of the hyper sleep. At first, you only feel a tingling in your mouth and a taste of your blood, but soon all the other symptoms hit you. Your head is exploding. Your stomach is turning. A strange noise rings in your ears. This sound is loud, piercing. An alarm!Fighting through dizziness, you open your eyes, the lights of other hibernation chambers blinding you momentarily. Broken glass. Wet floor. A stasis pod burst open like a ripe watermelon, dripping with red. The thing inside was once your friend. Now it barely resembles a human, ripped open from the inside - damage too severe for a simple stasis pod failure. You raise up and check if your other mates are all right. The good news is: they are. You all gather in the middle of the room, shivering, half-naked. The bad news is… plentiful. Ship stuck in the middle of nowhere. Many systems damaged. Bulkheads breached. Unknown contaminants in the air. You also hear noises in the hollow halls of the ship. You’re not alone! 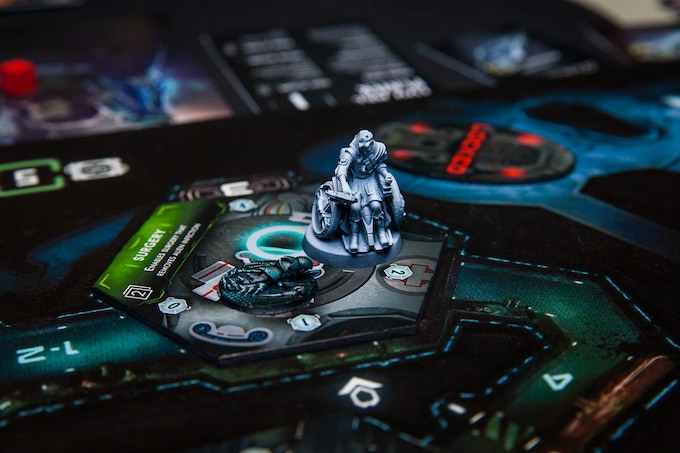 Playing Nemesis will take you into the heart of Sci-Fi survival horror in all its terror. A soldier fires blindly down a corridor, trying to stop the alien advance. A scientist races to find a solution in his makeshift lab. A hacker breaks into ship’s navigational system and enables self-destruction. A pilot sets the alien nest on fire, while his friend seals himself in the control room. A traitor steals the last escape pod in the very last moment. All this – and other memorable actions – await! Ship explorationOne of most important parts of Nemesis gameplay is exploration. Every room of the ship may contain useful items and enables a different special action, from activating fire extinguishers to cutting out infected tissue. This makes it necessary to reveal as many room tiles as possible. But beware, while searching for a proper room, you will make noise that may draw some uninvited guests. 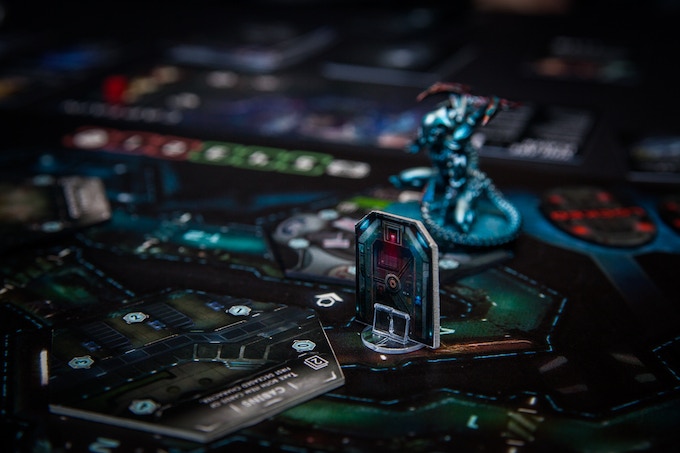 Ship's layout is randomized before each game, so you are never sure what to expect behind next corner... Unique combat 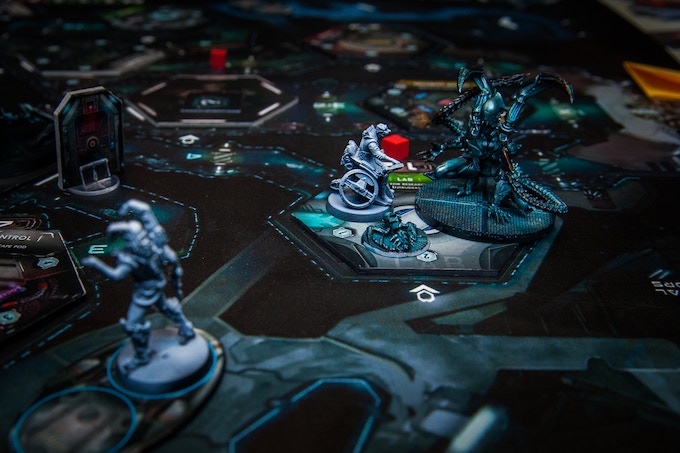 This game is more about surviving than killing. When you face horrors from outer space, you may panic, and even if you manage to put up a fight, you will never know how much punishment your opponent can take. Killing intruders is a tough challenge, especially since ammunition is a rare commodity on the ship. Evolving Intruders Jerry, big news! We’ve received the first transmission with some preliminary data. It seems it’s an auxotrophic, anaerobic, mineral-based trans-dimensional life form (what a mouthful). No DNA, XNA or anything else we could expect. Instead, a strange self-propagating crystalline structure. Outer skin layer? Pure Lonsdaleite! We've never seen more than few grains on Earth, and this thing is covered in it! Fifty percent tougher than diamond, go figure. 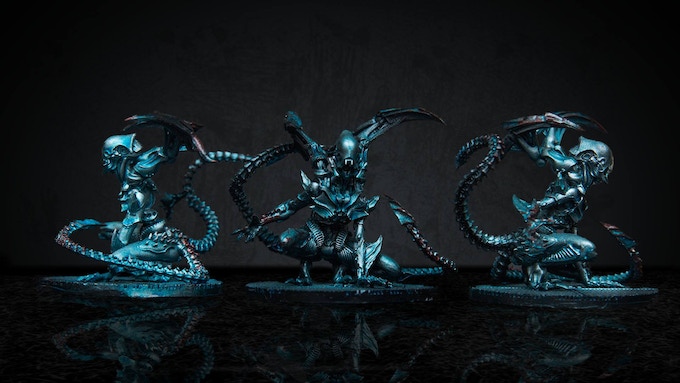 It sheds this outer skin during each development cycle, thanks to a violent thermochemical reaction. But that's not the worst part. You've heard about this research into weird crystals with a structure partially hidden in other dimensions? Well, our guys say these creatures employ a similar process. Much of their growth happens... elsewhere. Then, when they gather enough energy, they shift modified organs and body structures back into this world. The may also be native to deep space, as they survive vacuum well enough to put Tardigrades to shame. Anne also believes they’re an extremely adaptable omnivore. Sounds scary, right? I hope the top knows what they’re doing with this one.Intruders you meet on the ship are not only reacting to the noise you make but also evolve as the time goes by. The longer the game takes, the stronger they become. Time pressureEncroaching enemies are not the only thing that pushes you to work faster. The ship is already counting down to the emergency hyper-jump. If you fail to repair the engines before that happens, or if the jump catches you outside of your stasis pod, extreme acceleration is going to turn your character into a red splatter on one of the walls. 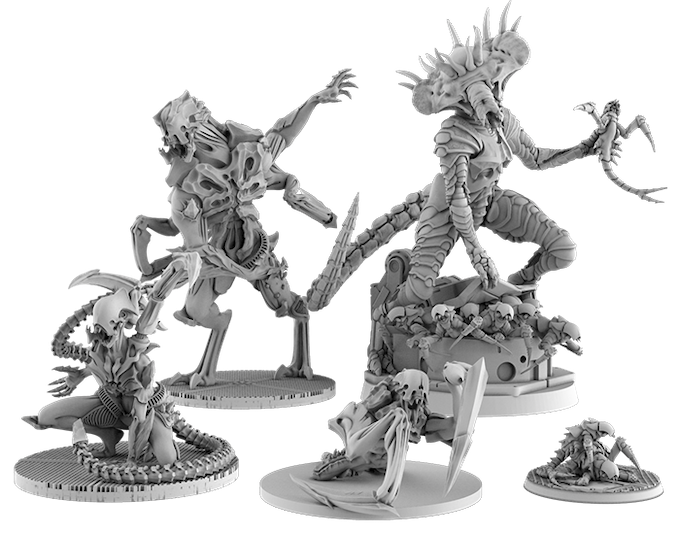 World and design We've reached for the stars. Asteroid mining was booming. Colonies on Mars and Venus approached self-sufficiency. Then, a wanderer came from far depths of the universe at half the speed of light. It glanced the Earth's moon, ripped it apart, threw out of its orbit, and caused catastrophic damage below. Solar system plunged into crisis.  Still, many chose to focus on profit, as the residue from the impact contained unknown minerals and exotic matter that made our plain old asteroids seem boring. Obsolete spaceships, previously used for colonizing the solar system, were refitted and crewed by people desperate enough to spend years in vast spaces between the stars, hunting for the next big catch. They became whalers of deep black, scavenging for comets, asteroids, dead proto-planets, and other strange objects coming from far corners of the universe.

Many disappeared. It was to be expected. Intercepting unknown objects at incredible speeds was not exactly safe. Then, there are rumors at least one crew found something they were not supposed to... 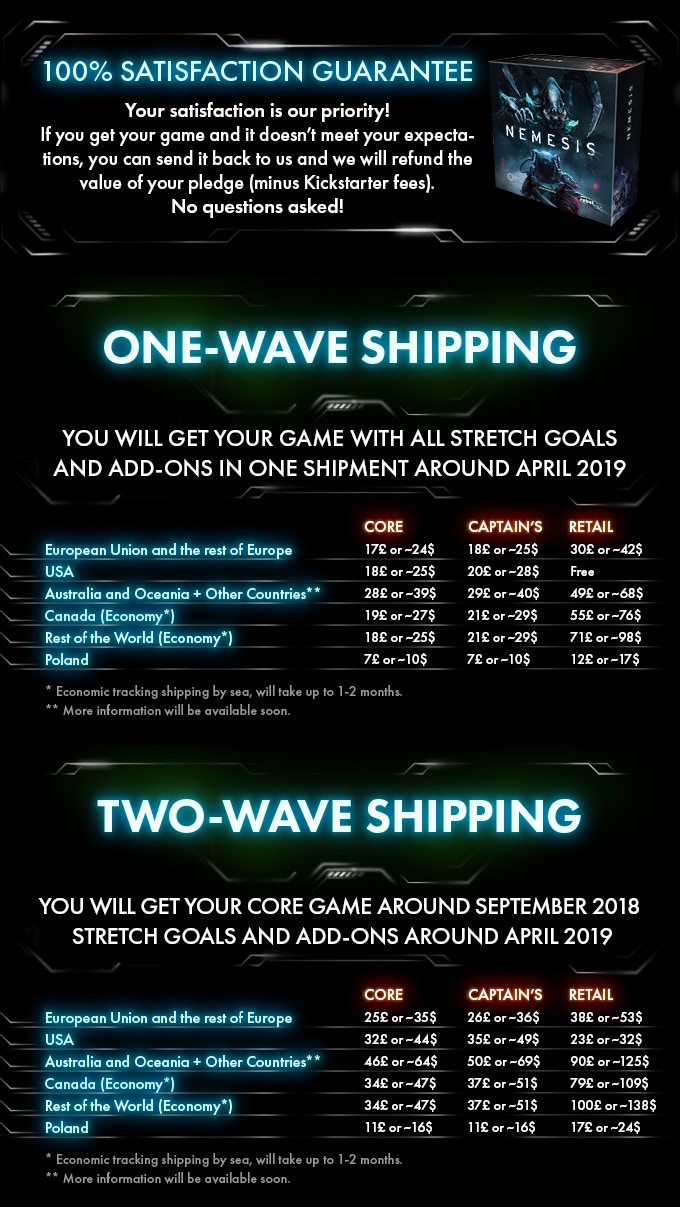 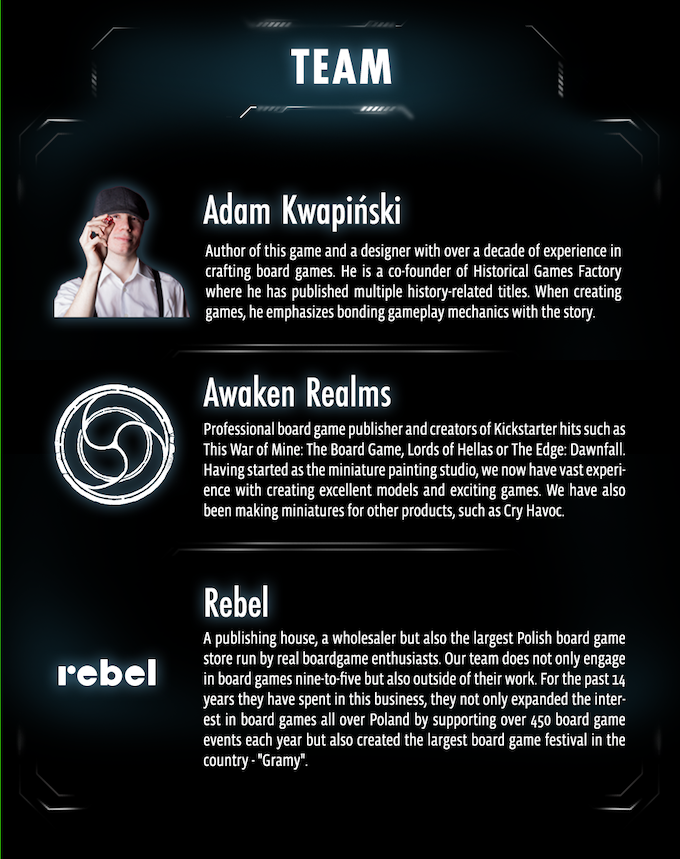 Risks and challengesWe have currently successfully finished 3 Kickstarter projects. While the Nemesis campaign goes live, we're in the middle of shipping the first wave of Lords of Hellas game. Soon after the end of this campaign, we estimate to start the shipping of The Edge: Dawnfall, which was delayed.These two projects at this stage are managed production and delivery team, while Nemesis is on creative stage, so they do not collide.We are confident about the delivery of the game - we have accumulated vast experience working on other titles and projects. The only risk factor, which can always happen, is a delay in delivery due to unforeseen circumstances. Even though the bulk of design work is already completed, as proven by many reviews, Nemesis is a huge and complicated title, and in pursuit of great quality it might take more time to complete.Please note that this is not a pre-order and the final product might slightly change in the process or get delayed. We are fully devoted to creating an amazing experience and you can trust us that every choice we make will only be aimed at improving the standard of the final product.

SERVICE
Newsletter
ABOUT US
PARTNER